Yesterday morning, I woke up craving the Fisherman’s Pie that Tex ordered while we were in Ireland. He said, “Well, make it!” So I did. We both think the homemade version is as good, if not better, than the restaurant version that we tried a few weeks ago. 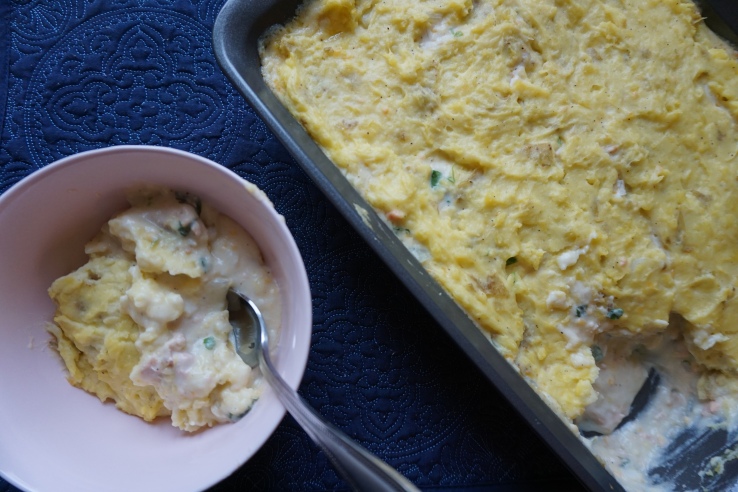 I looked and looked for a simple recipe, without the frills of white wine, but that included all the right seafood too. I couldn’t find one. So this recipe is my best effort at recreating the traditional dish. One of the greatest things about it is that it serves 6-8 people for about 20 Euro… And considering that this thing is chock-full of seafood, I’d say that’s a win! 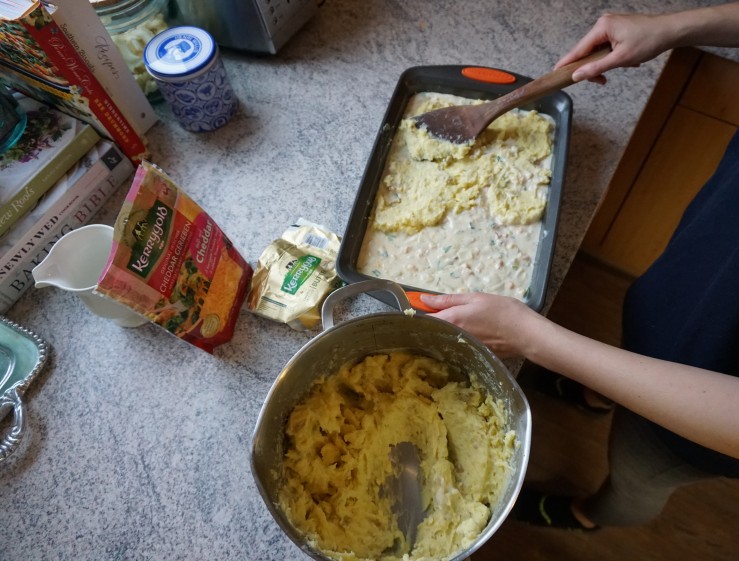 2) Place fish/shrimp and onion into a large saucepan, and pour in milk until fish is just covered. Bring to a boil and then reduce heat to medium and let simmer for 2-3 minutes, until shrimp turns pink and fish starts to look cooked. Remove from heat and let cool for a few minutes. Strain milk from the fish and onions, and save milk for sauce. Break up the fish into smaller, bite-size chunks and set aside.

3) In an empty saucepan over medium heat, melt butter and then whisk in the flour to make a roux. Cook for 2-3 minutes. Add the strained-off milk and stir well. If sauce begins to look too thick (what you want is a thick chowder consistency), then add more milk. Once the sauce is simmering, stir in the cheese. Add parsley and season with salt and pepper. Remove from heat.

4) Meanwhile, prepare the mashed potatoes. Place potatoes into large pot and cover with water. Bring to a boil, and cook until a fork easily pierces the potato. [Tip: Place a wooden spoon over the top of the pot to keep the water from boiling over.] Drain out the water. Add butter and cream, and mash the potatoes. Season with salt and pepper.

5) Combine the sauce with the fish and pour mixture into 9×13 pan. Thickly spread mashed potatoes over the top. (Extra potatoes may be eaten separately!). Bake in preheated oven for approximately 25 minutes.